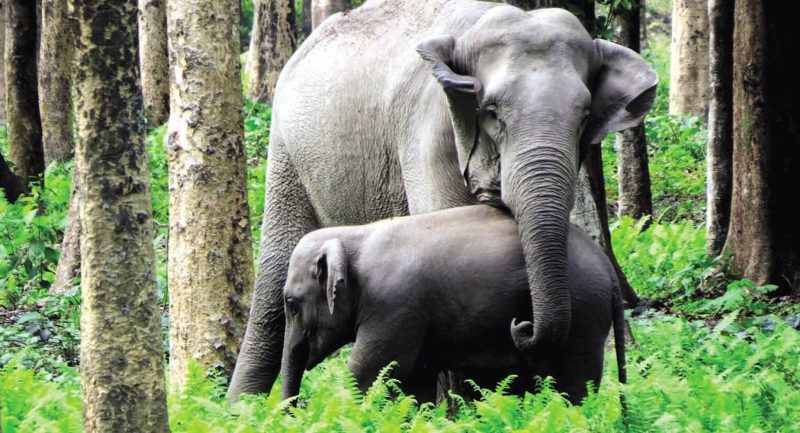 Duncan McNair, founder and CEO of Save The Asian Elephants, highlights the plight of Asian elephants, his work in seeking UK legislation to prevent the abuse of elephants and how his faith helped inspire him to take action.

To witness little elephants beaten, bloodied, injured and crying, their natural lives forfeit – all in the name of tourism profits – is an outrage and a tragedy. It is done to “break the spirits” for easy tourism use, reinforced throughout their remaining life in captivity by stabbings and beatings. That much of this horror is driven by the UK market is cause for national shame. Save The Asian Elephants urges new UK law to ban advertising, promotion and sale of unethical venues – in favour of genuine sanctuaries where elephants live as natural a life as possible compatible with security, exhibiting natural behaviour in herds, observed by tourists at a distance safe to both. 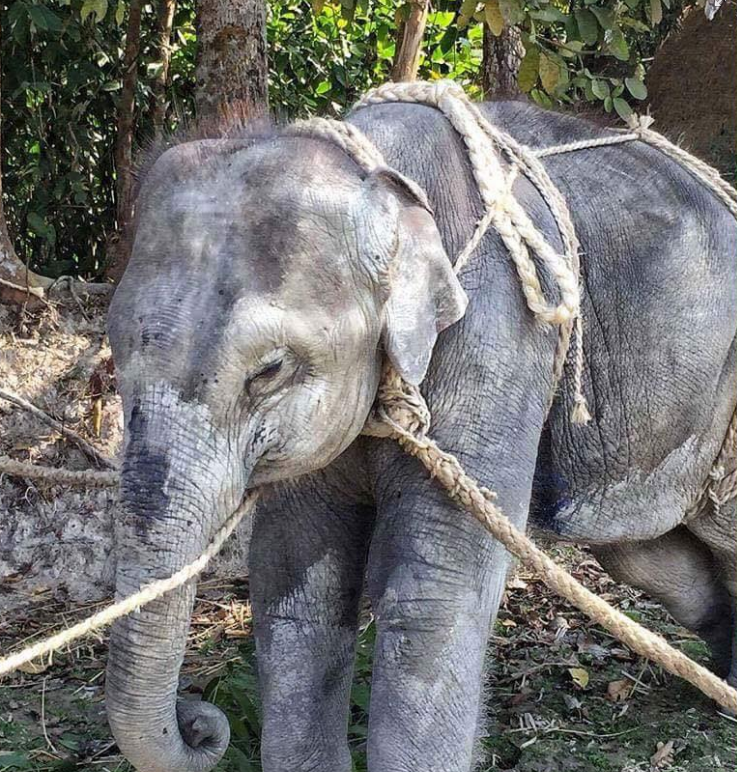 STAE’s approach has been to greatly raise public awareness of such tourism exploitation, long suppressed by those profiting from it. Our research shows the widespread, systematic, violent abuse of critically endangered baby and adult Asian elephants at thousands of tourist venues across SE Asia, promoted in the UK market by hundreds of travel businesses, nearly a quarter being members of dominant industry representative ABTA (Association of British Travel Agents). When challenged offending companies routinely cite “errors” on their website (but continue selling such places) or “we’re getting round to changing” (but don’t) or “we’ve never advertised those venues” (until shown screenshots), and so on. Candour is a very rare bird.

ABTA refuses to back STAE’s call for a ban on unethical advertising – whilst urging government that light touch self-regulation will do. But the industry marking its own homework has failed for years, enabling this brutal market to flourish as elephant numbers have crashed. ABTA’s voluntary, unclear “guidelines”, lacking any mechanism for monitoring, enforcement or sanction for breach have proved worthless as the commercial imperative of their members prevails. Sadly experts ABTA asked to help draft the guidance have reported being wholly let down when seeing the text as published. One has described the guidance as “dangerous” in its present form.

How did the UK market sink to this?  Since the 1960s, the package tour boom has fuelled intense demand for elephant attractions, triggering increased snatching of babies and calves from the wild for ruthless “breaking” and then use in riding, football, painting and “games”. The UK plays a leading role in stoking demand but also in supplying tourists to the elephant home states of SE Asia, far more than any other European country (2m to India and Thailand in 2018/19). In 2016 there were 13m elephant rides in Thailand alone.

Little is done to alert tourists to the dangers posed by captive elephants tortured beyond their endurance: they attack, often fatally. Yet destinations with such records remain widely promoted in the UK market. 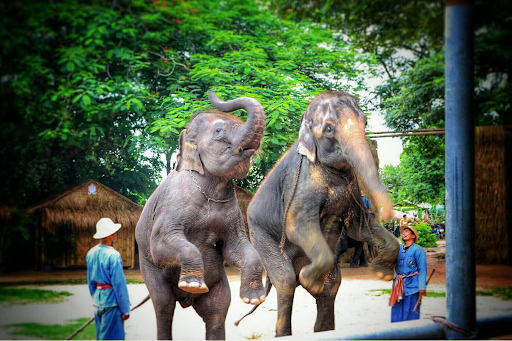 Brutal “training” to do tricks for tourists – all reinforced with stabbings as well as every humiliation. Some tricks are agony for the elephants to perform endlessly.

What of Covid?  Broken tourist elephants, malnourished, routinely brutalised, held in fetid close confinement, denied any exercise (in the wild they typically walk 60km a day), their immunological defences spent, are highly effective transmitters of deadly airborne viruses like TB, SARS, Ebola. As scientific enquiry advances, the risk they shed Covid-19 too is obvious. The people of India, home to two thirds of surviving Asian elephants, desperately struggling with Covid, are at further risk from this reckless promotion of unscrupulous venues, a perfect storm of dangers when restrictions ease. Meanwhile it is hard to sympathise with demands from those controlling tourist elephants for financial recompense for lost revenues in lockdown when so often they have grievously abused and neglected the elephants during the years of plenty. They should adapt to sustainable models, with ethical sanctuaries and humane practices that respect their “investments” rather than squander them.

How can we so treat this ancient species, beloved of the whole world, yet victims of the worst animal cruelty of all, brought now towards the edge of extinction and the end of its long journey on Earth?  STAE’s cause for the Asian elephants in their desperate need draws support from those of all faiths and none. As humans we react instinctively to extreme violence committed upon the defenceless. Backing comes too from senior UK spokespeople for every major religion represented in the SE Asian range states, and all major Western religions, expressing uniform horror at the brutality daily committed upon this ancient and gentle species in the name of profits. Each cites passages from its own sacred texts to denounce the status quo and endorse new law to ban the promotion of brutal Asian elephant tourist venues. These unite in the broad proposition that a benevolent Creator enjoins humankind, in exerting its de facto dominion over all other species, to do so with respect and compassion, and moreover that insofar as humans are invested with some unique spark or soul, this does not licence abuse. On the contrary Man’s is a solemn duty to discharge, with forebearence and empathy, to all living things and the world at large. 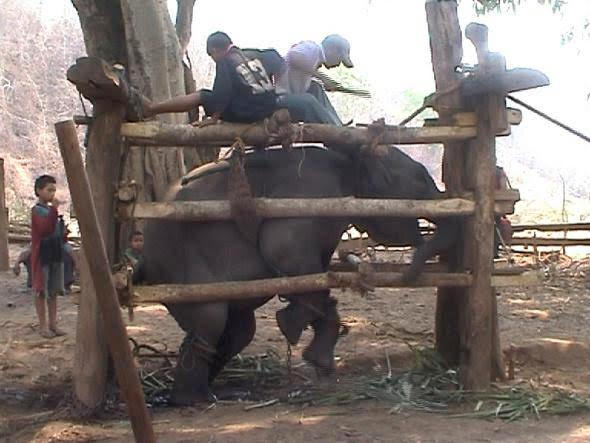 “Pajan” in progress. Pajan is where an elephant suffers weeks of starvation, dehydration and extreme noise, then brutal beatings and stabbings to break its spirits. Some 50% die in the process or afterwards.

As a cradle Catholic, my own beliefs align precisely with this. Had I ever been in doubt on the subject, unequivocal affirmation is found in Laudato si’, Pope Francis’ magnificent encyclical of 2015, subtitled “care for our common home”, critiquing reckless development and environmental despoilation, and urging immediate dialogue that leads to “swift and unified global action”. The encyclical sets a wide lens, broader even than topical environmental concerns. It speaks of global warming as a consequence of a still bigger problem: “other living beings seen as mere objects subjected to arbitrary human domination”. In truth we – humanity, all other species and nature itself – are interconnected and interdependent.

This can surely never be more true than for the Asian elephant, often termed a “superkeystone species” and “megagardener of the forests”, crucial to the replenishment of our environment, containing our carbon footprint and curbing climate change.

As the cloak of secrecy slips to reveal the horrors, public disgust has soared. Populus polling this summer showed 90% of Britons demanding an end to tourism abuse of elephants. 79% want STAE’s new law now. STAE’s petition nears 1 million signatories, with 29 million more from aligned petitions. People and organisations from every sphere of influence, authority and celebrity in the UK back such law, including all major parties at Westminster. 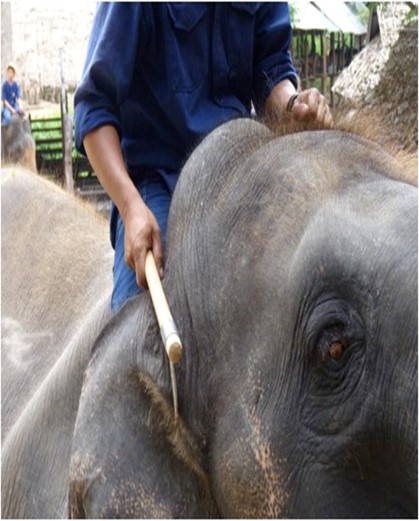 The ever-present bullhook used in training to injure and terrify. It is used to rip flesh of babies and adults, to stab and injure the most sensitive parts like under the toenails, between the shoulder blades, in the anus, and even stabbing and injuring the eyes.

Is Government acting in response to an ever rising tide of public concern and, ever more now, of public health too?  STAE hopes its ongoing talks with government will yield results reflecting our policies – new law, but also joint Anglo-Indian projects to improve elephant treatment, veterinary exchange programmes, promotion of genuine sanctuaries like Elephant Nature Park in Thailand and tour companies such as (amongst others) the well-named Responsible Travel. STAE’s aim is to steer the market from the brutal and dangerous towards sustainable and ethical, benefitting local communities as well as the beleaguered elephants.

In October 2019 Environment Minister Zac Goldsmith helpfully asked STAE for draft legislation – the Asian Elephants (Tourism) Bill.  At the time of writing we await progress by DEFRA (the Environment Department); and a statement from Oliver Dowden, Culture and Media Secretary, responsible for advertising – and to whose department ABTA’s ongoing approaches remain very unclear.  Above all, collectively and in tens of millions we urge our head of government to act, before it is too late. In Joanna Lumley’s words:

We say to the Prime Minister: please help end this callous abuse by making such unethical advertising illegal. We trust you make a compassionate decision. And speed is of the essence”. 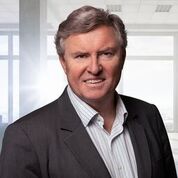 Duncan McNair KHS is a lawyer and founder and CEO of Save The Asian Elephants www.stae.org STAE’s petition for change can be signed at: bit.ly/STAEpetition  It urges that you ask your MP to support its call for new law. Suggested wording and your MP’s contact details are at: http://stae.org/write_to_your_mp/

This article is based on a piece by the author in The Telegraph on 28 September 2020. 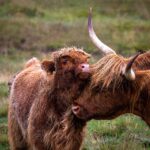 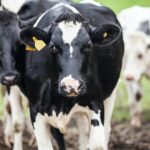