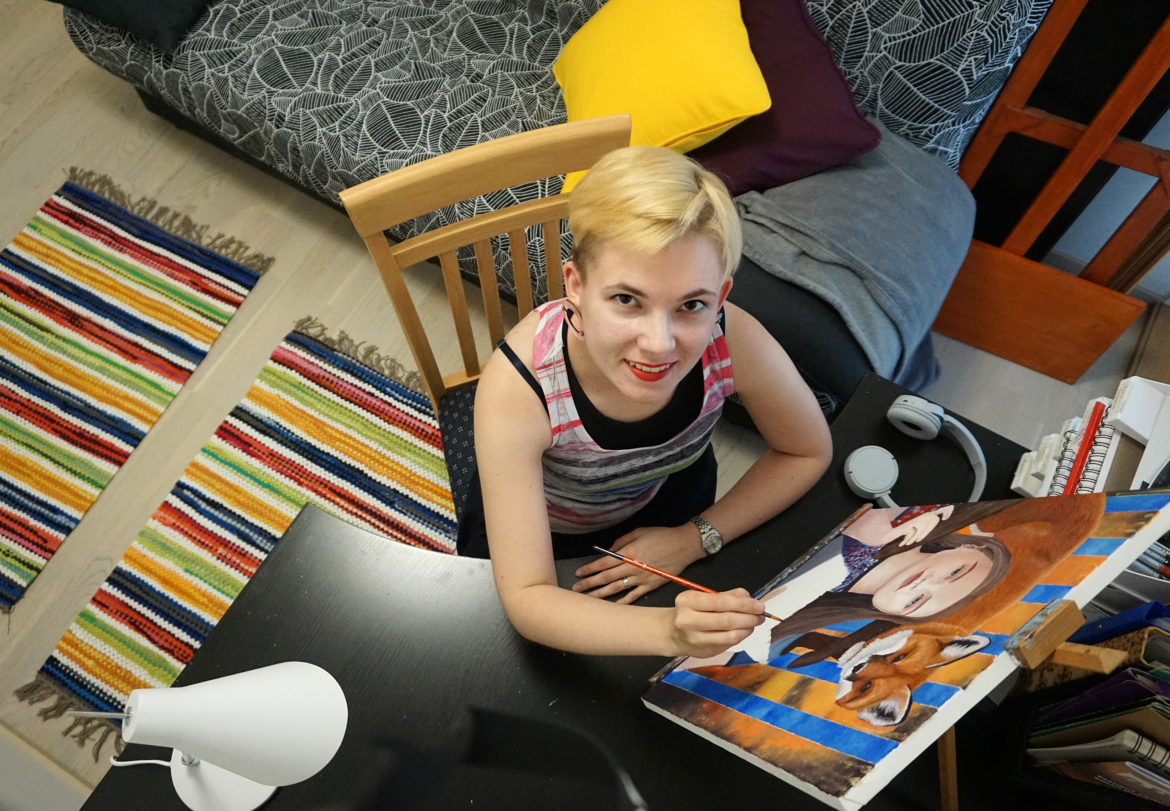 We have all heard the numbers of chickens, turkeys, cows and pigs that are bred for human use. We have seen pictures and video material of them in cages, pens and barns. Numerous snouts, beaks, tails, wings… there are so many animals that it’s hard to imagine they all have their own persona and their own life story. It’s easier to see them as a huge crowd instead of many sentient individuals. This is problematic because once we begin to recognise feelings, features and habits that are familiar to ourselves, we can – at least on some level – understand how the other person feels. By recognition we start to feel compassion.

In a Christian context recognising animals as individual beings is often difficult as well. It’s even neglected. We tend to leave their value and characteristics out of our religious circles by dismissing their emotions and lives. Whether it’s art, sermons, hymns or prayers, animals are mostly described just as symbols or as a rather small part of the created world, not as sentient beings we could relate to. Animal concerns are rarely mentioned in prayer during intercessions. Neither do we publicly discuss ways to alleviate the suffering of our fellow creatures or consider how God might want us to treat them.

Even though we are often reminded to show compassion, we tend to forget that people aren’t the only ones who need it. 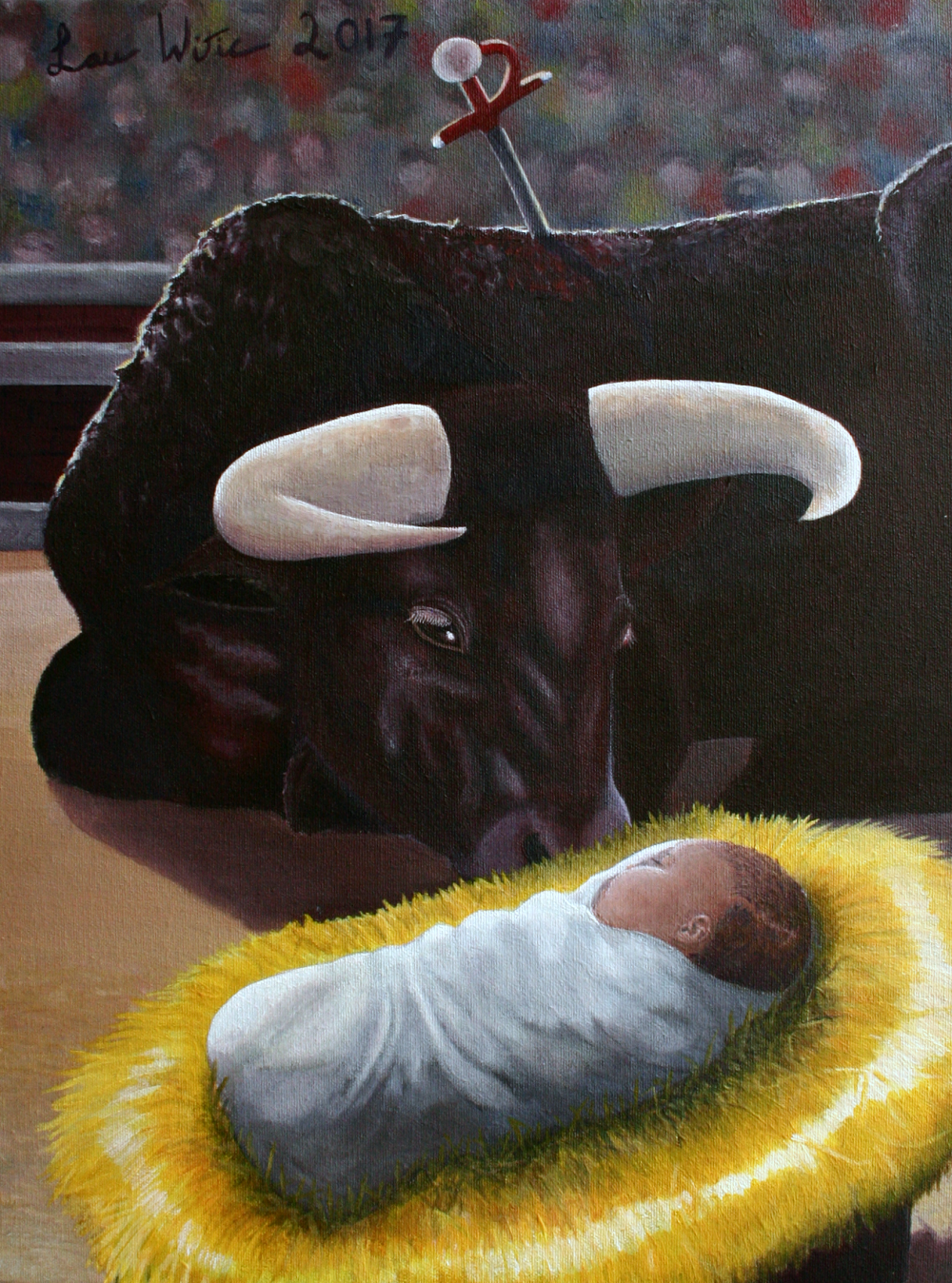 On some level animals are forgotten in Christianity – and it’s hard to notice something that has slipped from your mind. For example, I myself didn’t perceive them from the perspective of faith for a long time, although I studied theology at a university. I was concerned how we treat animals, but somehow reasoned that theology was one thing and animal rights another, and they had absolutely nothing to do with each other. Combining these two didn’t even cross my mind. One day I happened to read an article about animal ethics and theology, and soon I became aware of how good we are at brushing animals aside. I started to explore Christian perspectives of animals and, whilst at university, wrote both my Bachelor’s and Master’s theses on animal theology. It didn’t take long to discover that the topic was also quite new among other theology students and it raised mixed feelings: curiosity, bewilderment, joy, amusement, and even anger.

In my free time I painted a lot. It was only inevitable that the thoughts and feelings considering animals found their way on the canvas. After graduating and becoming a full-time artist, the idea of creating some new kind of Christian imagery about animals inspired me. In my paintings I wanted to represent animals not as a background but as a serious consideration. 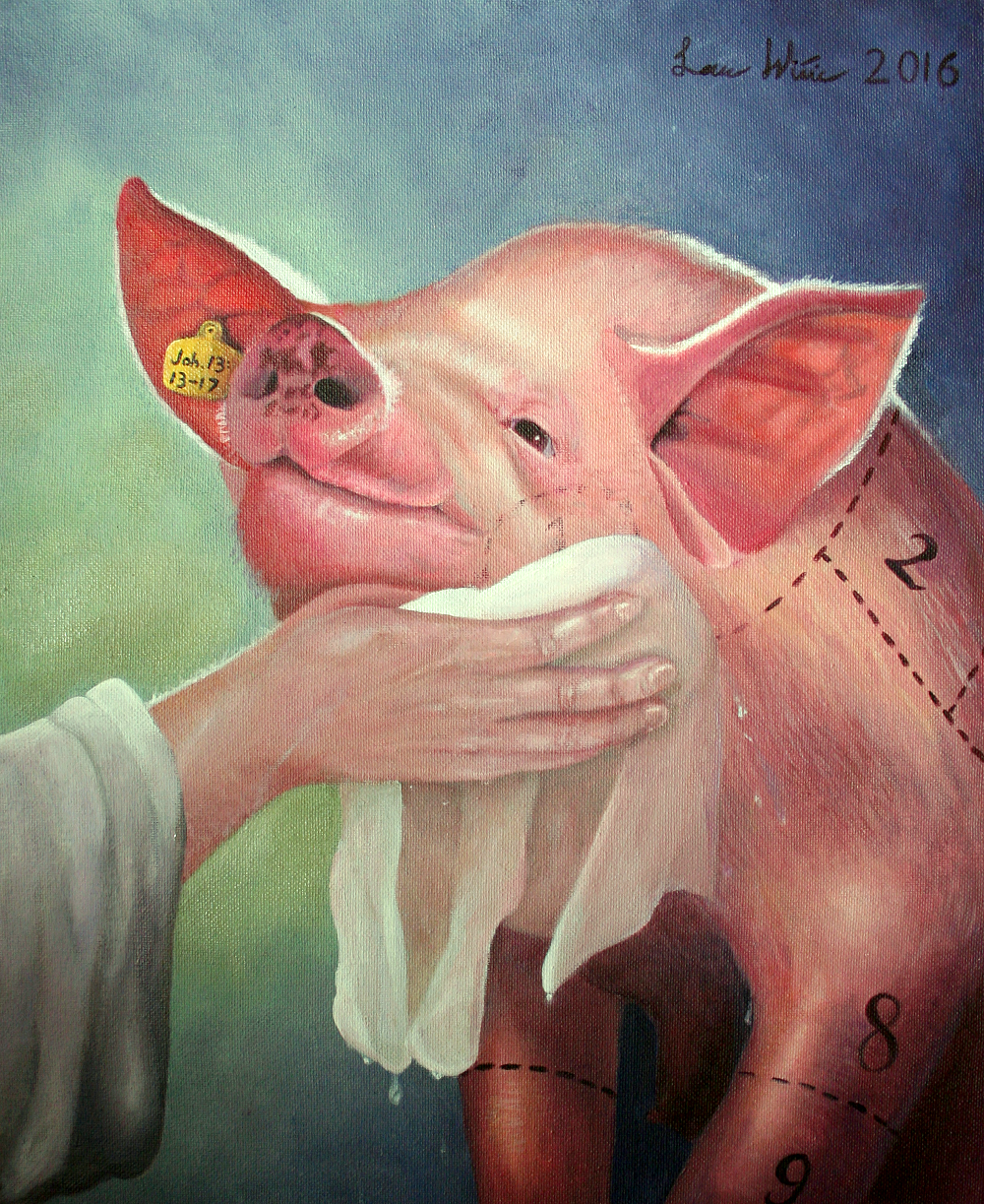 For example, the painting called Finally is about a pig that has cut marks drawn on her skin being washed off. She has an ear tag that says “John. 13: 13–17”. In those Bible verses Jesus has just washed the Disciples’ feet, despite being above them as their Teacher and Lord. He gives an example of how we should treat each other. Even if we think we are above animals, that doesn’t mean we should become arrogant towards them. We can, and we should care about them and try to wash off the marks we have put on them.

Harlow’s Church of Motherly Love and Fatherly Grace, on the other hand, is a piece where a monkey is hanging on a cloth that is wrapped around a cold, but decorative cross. The painting refers to Harry Harlow, a psychologist, who studied a mother’s importance in the development of children by observing infant rhesus macaques separated from their mothers. Harlow made a red eyed “cloth-mother” for infants and noticed that they would rather choose a fake mum’s presence than food. Infants attempted to hug the cloth-mother even if there were dangerous spikes placed on it. In the painting, church has been presented as cloth-mum, ignoring animals completely. Our religious behaviour is just watching them and making observations for our own sake. 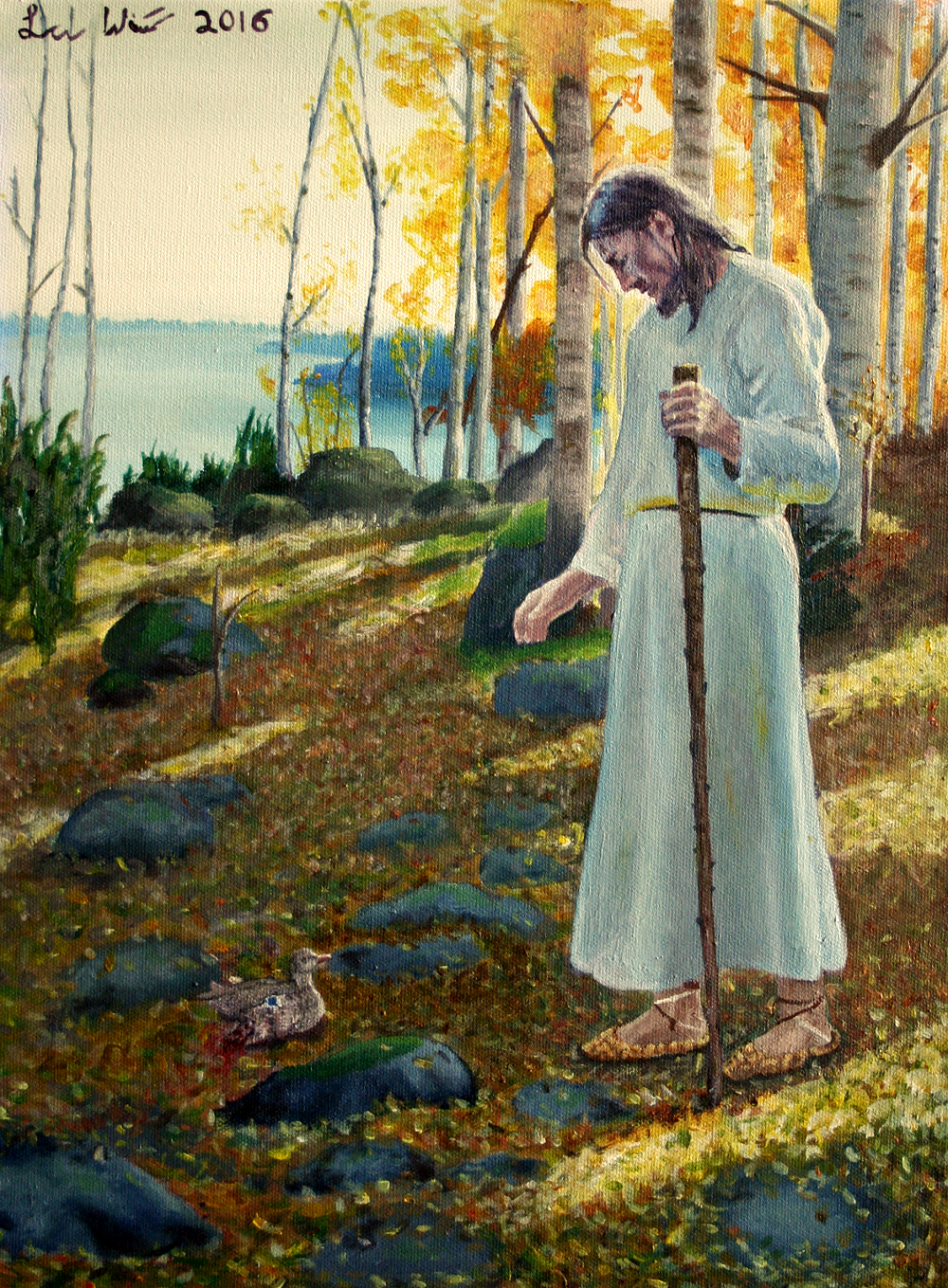 You preserve both people and animals (2016)

Even though this last-mentioned painting contains a bit of a dark view of our behaviour, I feel there is a lot of potential in Christianity when it comes to animal rights. The Bible encourages us to be merciful and loving, and animals aren’t excluded from that. That’s why there is always hope included in every piece I have painted.

After all, they are just paintings, just objects consisting of paint, wood and canvas; tools to pass on ideas, emotions and thoughts. It’s bizarre how sometimes it’s easier for us to appreciate a human-made painting than a living being. Needless to say, it still means a lot to me if this art can encourage even one person to speak up for animals.

Maybe someday numbers will become individuals and animals will be given a more central role in churches, in Christian discussion and in our everyday lives. I hope in the near future we will recognise the use of non-animal-tested products, vegan food and speaking up for our co-creatures as an act of mercy and a mark of love. I believe that by reminding each other to care for animals through our daily actions, we can positively influence attitudes towards them and help each other to recognise them as God’s unique creatures. 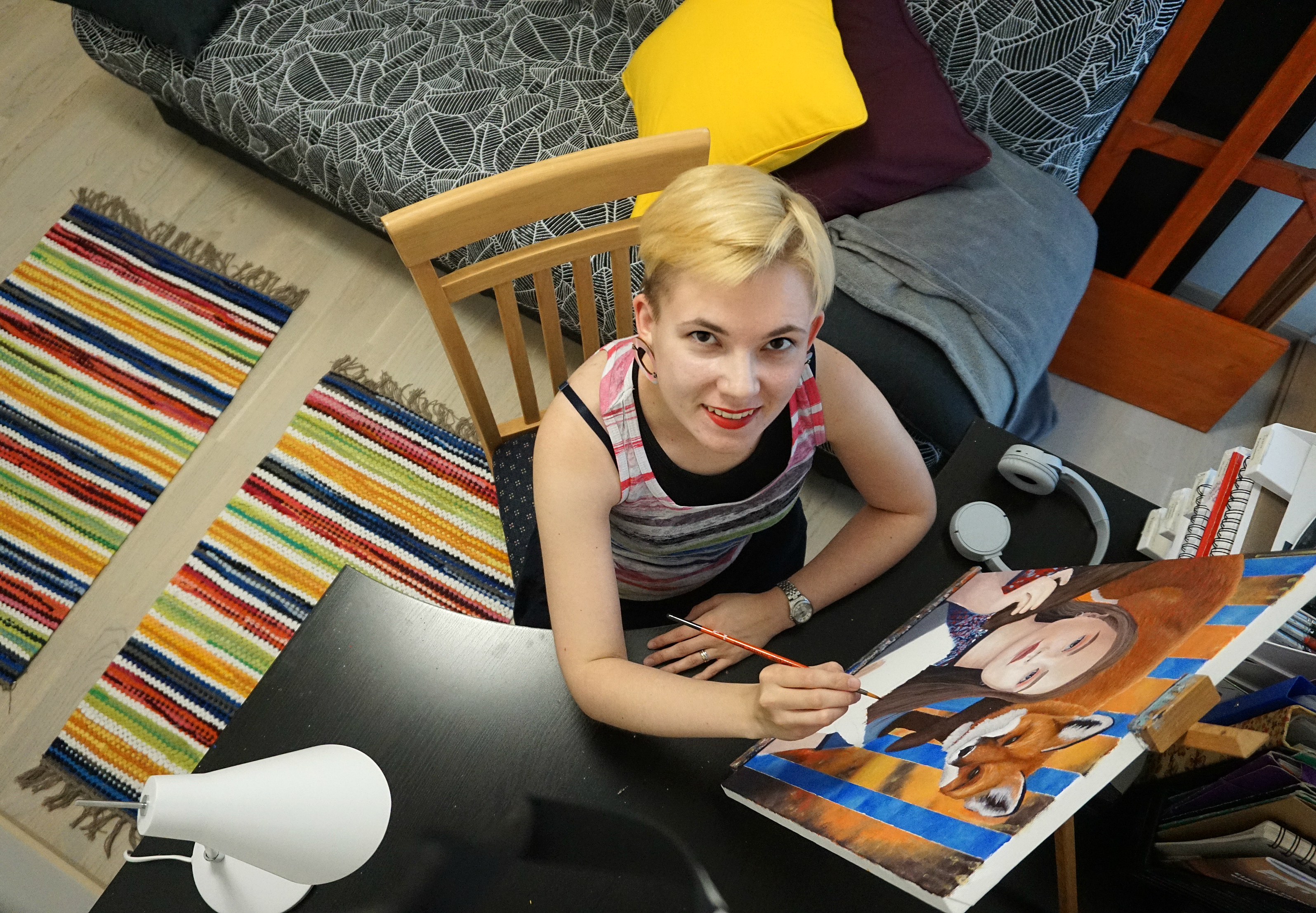 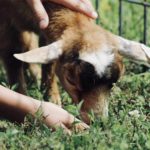 Why Vegan? A Synergy of Animal and Human Justice – The Revd Janey Hiller 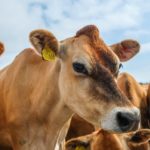